How to Pick the Best Insurance Company for Infinite Banking 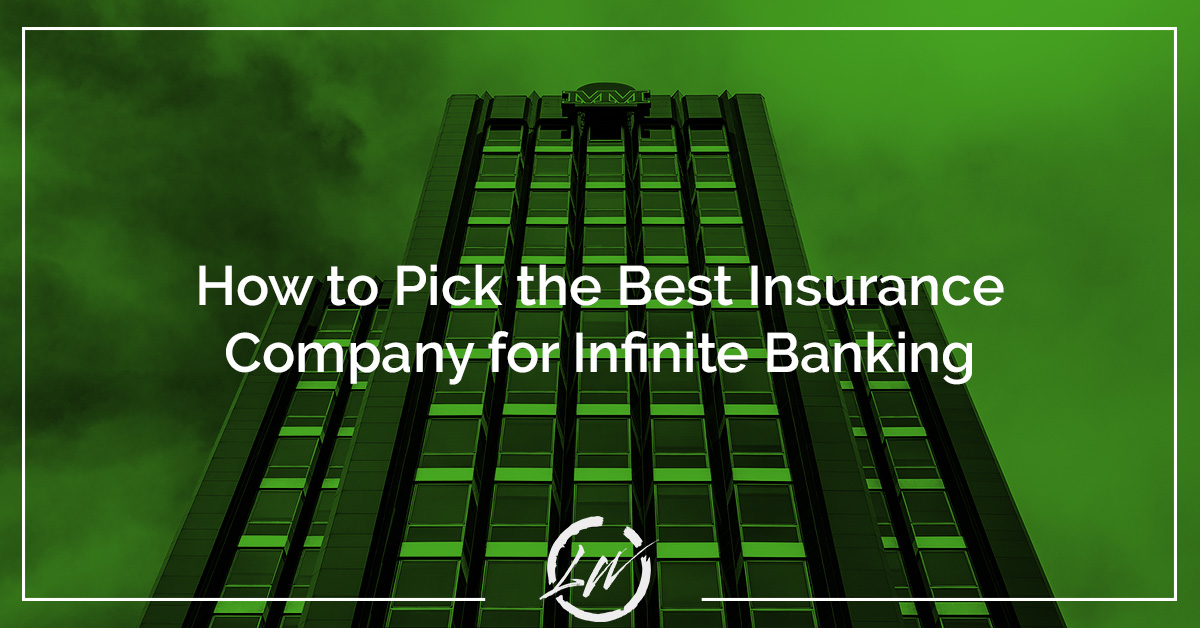 How to Pick the Best Insurance Company for Infinite Banking

The topic was recently covered in episode 149 of the infinite banking podcast called “Dollars and Nonsense,” published on the Living Wealth website.

In episode 149 of the “Dollars and Nonsense” podcast, hosts Nate Scott and Holly Reed explained that it is virtually impossible to find a perfect insurance company to use with infinite banking. However, there are certain variables to consider when choosing one. And these will vary depending on a person’s current financial situation. The goal is to find an insurance company that will allow clients to use a policy how they like and maximize its potential. Discussed below are factors to consider when choosing an insurance company.

One of the first points Scott and Reed make is to not put too much emphasis on finding the “perfect” insurance company. Although some insurance companies may be better options than others, it is impossible to predict a company’s success throughout the duration of a whole life insurance policy. It is easy to get caught up in projections, numbers, and illustrations presented by different companies and lose sight of the goal of becoming one’s own banker.

Illustrations and projections given to potential clients only show a portion of the overall picture. They often do not indicate whether a policyholder can take a loan out, what happens when more money is put in, what happens when a lesser premium is paid, etc. Illustrations are also based on the current dividend scale, which can change drastically throughout the years. There are many variables to consider, and it is impossible to say with certainty that one company or policy triumphs over all others.

For these reasons, Nate encourages viewers not to “put too much emphasis on this belief system that the insurance company is the greatest determiner of my success practicing infinite banking.” Having that mindset can allow individuals to get deceived and taken advantage of fairly quickly. However, this does not mean that illustrations and projections do not provide valuable insight, but they should not be the only deciding factor.

In this episode, the hosts also examine the use of multiple insurance companies. When people succeed with infinite banking, they often buy additional policies.

“The reason why we want to emphasize the fact that there’s not a best company, is that it’s the same belief you shouldn’t put all your eggs in one basket. So you want diversity even with your policies, but the other thing is that at any given point in time, nobody can predict what’s going to happen in the future, which is one of the things we’re going to talk about. So just because that company looks good today, doesn’t mean it’s going to be the best next year, five years from now, 10 years or 15 years from now,” said Holly.

Insurance companies all have different features to offer clients, and the value of these features may depend on one’s goal. For example, some companies have more flexible paid-up additions riders. A paid-up additions rider is extra coverage bought using the money received from dividends. Flexibility with paid-up additions riders can allow a policyholder to move money around easily, reduce it to close to zero, put in as much or as little money as they want at any point, etc. These factors can be valuable to infinite banking but are not the be-all-end-all when choosing a policy. However, it is essential to understand different infinite banking concepts to filter through the illustrations an insurance company provides and ask the right questions (more important questions to ask in episode 102). And if a financial agent cannot answer those questions, then it is vital to reach out to other sources for help and guidance.

The biggest takeaway from this episode is to put less emphasis on the insurance company. Insurance agents and advisors will promote their biased opinions on their company’s policy. Still, the decision should be based on requirements that will allow the policyholder to achieve their financial objectives.

As Nate says in one of his final comments in the episode:  “How you manage the system, how much money you devote to the premium, how maneuverable you are in the system, how much you grow the system based on your own ability to fund and move money around and advance strategies you can implement, that’s honestly going to have a greater impact than the insurance company itself as long as the policy itself is a competitive policy, to begin with.”

More about the Dollars and Nonsense Podcast

The Dollars and Nonsense podcast focuses mainly on personal finances and wealth-building strategies, such as infinite banking and private family banking.

The podcast provides guidance, tips, tricks, and hacks for anyone wanting to take control of their personal wealth and put themselves on the path toward financial freedom.

It is hosted by Nate Scott and Holly Reed, with occasional guest interviews with wealth experts to help further expand the listener’s knowledge. The hosts present information in a way that is easily digestible to most audiences, meaning that listeners do not need to be financial experts to get something out of the episodes.

Scott is the President of Living Wealth. He has experienced firsthand the potential of infinite banking through Private Family Financing under the leadership of the founder of Living Wealth, Raymond Poteet. Scotta has made it his mission to help others experience the freedom and control that can come from becoming your own banker.

Reed is the daughter of financial expert and infinite banking advisor Raymond Poteet. He has helped numerous clients achieve their dreams through infinite banking. Holly has followed in his footsteps, joining the family business in 2009. Since then, she has dedicated much of her time to educating individuals and families on the benefit of Private Family Financing and how it can help them find financial freedom.

Home » How to Pick the Best Insurance Company for Infinite Banking