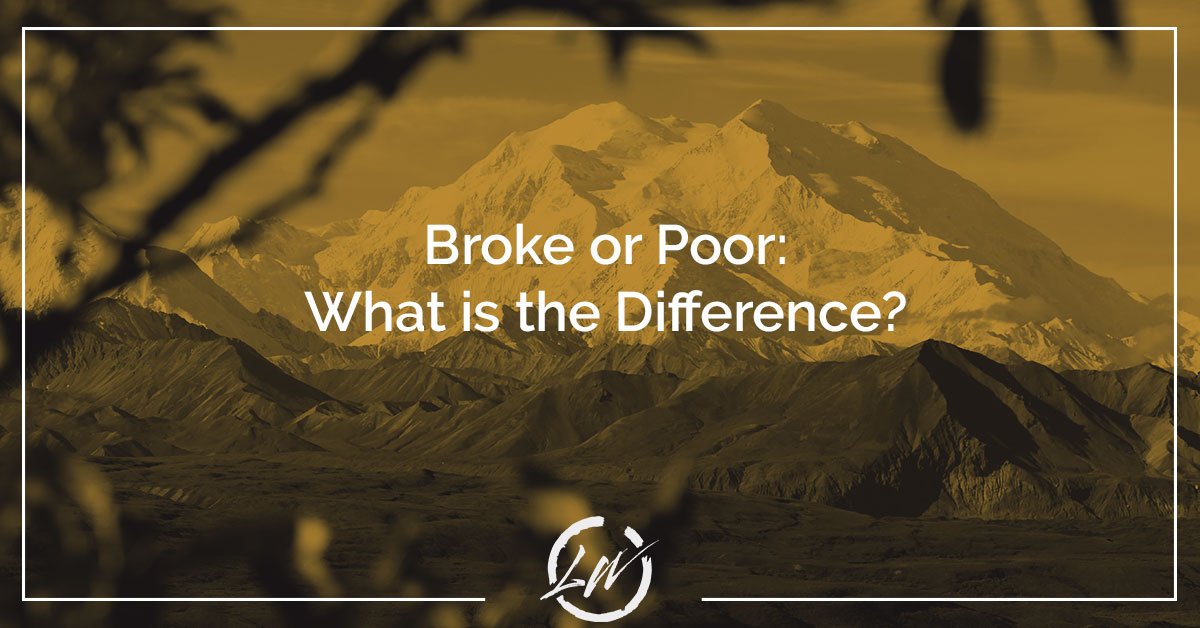 Broke and poor; these words are often used interchangeably to describe someone who doesn’t have a lot of money. However, when you break it down, they really are two completely different conditions.

While being rich isn’t everything, income has a large effect on happiness. It’s no wonder why; people who have no money can’t afford the things that make their love life, personal life, and even hobbies more satisfying.

Philosopher Ludwig Wittgenstein believed that words make our world. The language we use is our process for thinking about our surroundings, and something as simple as a change in language can affect the world around us.

This is why it’s extremely hard to understand the difference between being broke and poor. Indeed, they both describe someone who doesn’t have a lot of money, but they’re two completely different lenses with which to see the world.

What Does It Mean to Be Poor?

Being poor means more than just not having a lot of money — it’s a mindset. “Poor people” are people who are trapped in a system of poverty that affects both their economic life, their state of mind, and their outlook on the world.

Whereas people who are broke understand that they can break out of their current state, poor people have accepted it.

One of the most important parts of being poor and staying poor is being unable to give up a poverty mindset.

The poverty mindset is a frame of mind where someone believes that they will never have money. This, in turn, leads to them never taking the steps to break out of their sorry state, and even can lead to self-sabotage.

There are several sub-sets of the poverty mindset. One of the most important ones is the “just got paid” mind frame.

People who are “poor” will often spend more money when they’ve just received their paycheck, rather than budgeting it. “Poor” people don’t understand that the increase in money they’ve just received isn’t truly substantial — that to make the most out of their paycheck they should be constantly budgeting. If a poor person has been paid on Friday, you can bet that most of that money will be gone by the time the weekend is out.

The poverty mindset can also lead to many poor life decisions. Someone who believes they can never break out of their money-less state will be less likely to have more money to have what they want. So they won’t make the effort or take the steps to change their situation because they feel helpless.

Being poor is a complex concept, and it’s a difficult way to live your life. There are many symptoms of poverty. However, many people take these symptoms as causes.

Rich Dad Poor Dad is a great book that has already helped many people break out of the systems of poverty. It stresses financial literacy as its own unique concept, how important education is, and the importance of investing.

What Does It Mean to Be Broke?

To be broke means to not currently have a lot of money. That’s all it means. Nothing else.

An important mindset to adopt if you don’t have a lot of money is that you’re a rich person who currently is broke. Calling yourself a “poor” person will only breed the poverty mentality and lead to you staying broke. A persistent state of being “broke” that is difficult to escape over time leads to becoming “poor”.

Let’s break it down a little further.

Someone who’s poor is more likely to fall victim to the aforementioned poverty mentality. They may spend money excessively when they have it, and act like someone who they aren’t because they know they’ll never achieve true wealth. This, in turn, will create a self-fulfilling prophecy; the money that they spend will prevent them from ever escaping out of poverty.

Someone who’s broke is more likely to accept the current situation they’re in. They’re planning for the future, so they’re better able to cope with their present. They won’t mind spending time in a somewhat dumpy apartment, driving a beat-up car, and having a job they don’t enjoy, because they know they’re doing all they can to achieve their “truest self”; being rich.

Money can’t buy happiness, but a wealthy mindset can. Many people find themselves without money — you may even find yourself in a place where you don’t have a lot of money right now — but that doesn’t mean you’re “poor” or that you should accept that notion.

Understanding the difference between broke and poor is important in helping you break the cycle of poverty. Start thinking of yourself as “broke” rather than poor, and look for new jobs, business opportunities, and investments to get you out of the state you’re currently in.

For more information, check out our free course today.

E119: How to Make the Choice: Buy More Assets or Pay Off Debt?Previous Post
E120: Is Insidious Inflation on its Way and How to Protect YourselfNext Post

Home » The Difference Between Broke and Poor