Difference between Keynesian and Austrian economics 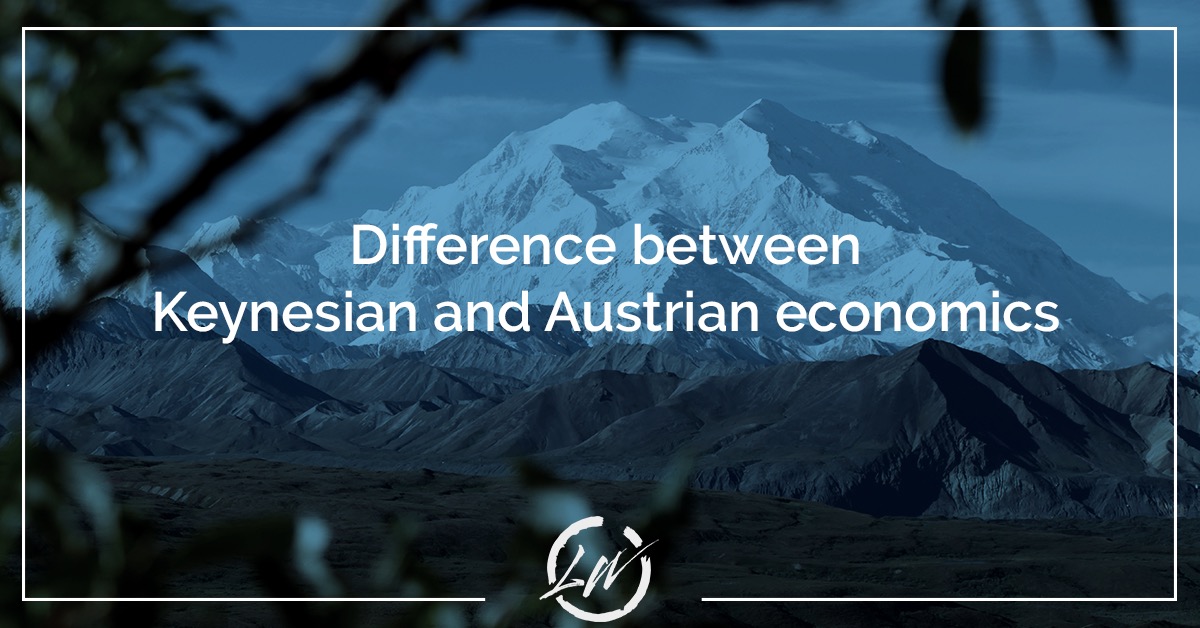 Difference between Keynesian and Austrian economics

Two of the most prominent schools of thought in macroeconomy are Austrian and Keynesian economics. These concepts provide insight into the economy and personal investments. However, economic decisions and investment outlook vary depending on which school is followed. We discussed the topic in episode 38 of our infinite banking podcast. There is more detail about the difference between Keynesian and Austrian economics in the article below.

What is Keynesian Economics

John Maynard Keynes developed Keynesian Economics during the 1930s. He lived through the Great Depression, and the principles of this school of thought stemmed from his belief that current economic theory could not explain what caused the Great Depression.

Keynes argued that aggregate demand (total spending of businesses, households, and government) was the economy’s driving force. He also believed that changes to improve aggregate demand could help prevent recessions.

Keynesians believe that government intervention is necessary to prevent or address recessions and market crashes. Governments should also implement policies to monitor and predict drastic changes in market conditions.

What is Austrian Economics

Menger’s principles focus on people and how their knowledge and environment impact decision-making. Austrian economists believe that value is subjective, and everyone has different needs and purchasing powers. Principles also focus on utility (usefulness and enjoyment consumers get from a product) and marginalism (value determined by marginal utility).

Austrian economists also believe that the best outcomes come from minimal government intervention and rely more heavily on deduction than empirical and statistical models and data. They make predictions based on assumptions and logical reasoning for human behavior.

One of the main differences between Austrian and Keynesian economics is the view on government involvement and intervention.

Austrian economics asserts that government control disrupts the production and supply cycle. Markets are viewed as efficient, self-regulatory, and controlled by people’s actions. Therefore, there is no need for government control.

Austrian economists also believe that the economy goes through natural processes, and recessions are necessary to fix imbalances in the economy. Government intervention to avoid reductions in spending is viewed as harmful and may worsen impacts from negative business cycles. The same thinking applies to individual businesses. Austrian economists believe that companies should be allowed to fail to make room for better ventures.

Keynesians stress the importance of government intervention. They believe that markets are inherently volatile and inefficient. Therefore, governments should implement policies to monitor and predict drastic changes in market conditions. Examples of these policies include:

Another difference between the schools of thought is the importance of spending and savings.

Austrian economists stress the importance of savings. They believe that money saved can be invested. The investment is used to improve business productivity, leading to improvement in the economy and growth.

Keynesians believe that spending, or aggregate demand, is the backbone of economic growth. And an increase in spending will lead to a higher Gross Domestic Product (GDP). GDP is the market value of goods and services produced in a fixed period (e.g., quarterly). Changes in the GDP growth rates show how fast an economy is progressing. Therefore, a higher GDP signifies a trend towards economic growth.

Keynesian and Austrian economics also have different approaches to inflation and deflation.

Austrian economists are not as keen on inflation because a more significant portion of a person’s money is spent instead of invested. In contrast, Keynesians believe that a steady inflation rate is good for a growing economy because inflation encourages borrowing, which often leads to more spending.

Another difference between Austrian and Keynesian economics is how money is viewed and treated. Austrian economists believe in “sound money.” Sound money is a currency backed by a hard asset such as gold. Therefore, following this principle, money can only be created if converted into an asset, which limits the money supply.

Keynesians lean towards “fiat money,” which is a currency not backed by an asset. This allows banks to increase and decrease the money supply, which may decrease the value of exchange rates and impact savings.