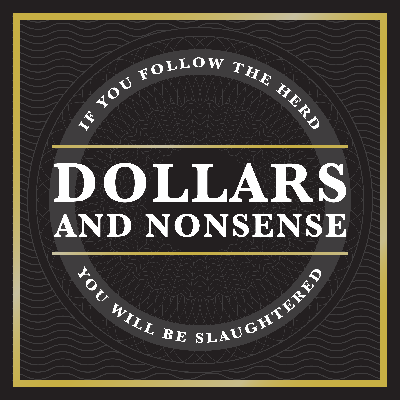 by Dollars and Nonsense Podcast 0 comments 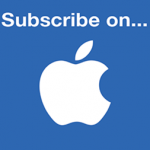 N: We want to introduce you to Living Wealth’s new podcast, Dollars and Nonsense, where we’ll be talking about outside-the-box strategies for wealth building. Always remember, if you follow the herd, you will be slaughtered.

H: As we start today, I want to tell you a little bit about myself. Again, my name’s Holly, and I came to understand infinite banking through my father, Ray. And really what it has brought to our family is financial freedom and the ability to continue to think outside of the box and to never lose control of our money. I was working 18 hours a day sometimes in a job that I did passionately love, but it always took me away from my family. And what I kept doing was trying to work harder, trying to provide more for my family, and at the end of the day, I found out I didn’t have any more than the person next to me who was doing the same thing. The key here, and what we really want to talk to you guys about, is how to get off that hamster wheel. So for me, it was about changing who got my money and helping people in discovering how to gain financial freedom. I made the choice to leave my profession at a university, where I had a master’s degree, and decided that my goal was to help individuals and families know how they could build wealth and leave wealth but also know how I didn’t have to keep working so hard to not get ahead. This changed my husband’s and my life. We have three beautiful children. [It’s] the fact that we don’t really worry anymore about that paycheck because we’re not living paycheck to paycheck. We have the financial freedom to be able to save, to go on vacations, but really [it’s about being] able to help not just our family but other families do the same thing we’re doing. The fact that you can tell a family you’re not going to have to work harder and keep buying stuff and paying somebody else, but you’re going to be able to help your family grow and understand how money works. [That’s] how I came into the business. Now Nate is going to share a little bit about himself.

N: Sure. I thought it would be great if I introduce myself as well. I’m Nate, and I’m actually also part of the family, but I married in, so I’m not blood. I’m second-tier. Just kidding. I learned about this model called infinite banking, which is something that we promote and that we love. And it’s way outside of the box, which is the goal of this podcast—to think against the grain. I learned about it four years ago the same way Holly did through Ray. It definitely changed my life. I grew up as the son of a teacher and a pastor, so we really didn’t have any money, and we didn’t know what we were doing with money. In those types of professions, they don’t teach you a lot about money. That’s where my background was from. Just learning the outside-the-box strategies to make money work better for you, and now that my parents are involved in it and, of course, I myself, it’s definitely changed everything. There’s a lot of financial nonsense out there that I really wanted to help people get straightened away. That’s what Holly and I both do on a daily basis, just bring some truth. That’s what this podcast is going to be all about. I’ve been in the financial world for four years. I don’t like thinking inside the box; I’m always trying to push the envelope and push the system to make it work harder. Find new ways to make it work. One of the things I believe is that people are being tricked into doing things financially that don’t make sense. And they ought to stop. That’s why our motto is “If you follow the herd, you will be slaughtered.” Because if you keep doing what everyone else is doing, you’ll get the same results that everyone is getting. And nobody is getting great results. So that’s a little bit about us. We wanted to introduce you what we’ll be talking about in the podcast itself. What will actually be going on? So, Holly, what are some of the goals we have or why would any listener want to listen in? What are we going to be teaching?

H: One of the keys is—I’m going to go back to Warren Buffett. He said, “If poor people would do the same things rich people do, they wouldn’t be poor.” Basically, there’s no different product. The rich have no different product than the poor people or middle class America. We have the same products to use. What Warren Buffett was saying is that the rich just use those products differently. So we want to teach you how to use money for you. Not to rely constantly on banks and credit cards, but really is there such a thing as a retirement program or nest egg or do we need retirement income? One of the keys here is, like Nate said, that out-of-the-box thinking. We’ve been taught to do stuff with money that you wouldn’t do with the things that money buys. And I think Nate can even expand on that more as to how we are using money within our means, and we shouldn’t be doing it that way.

N: Some of the things we’ll be talking about is [that] we like to expose a lot of myths as well. And you’ll find that coming soon with the various things we’re going to be talking about, whether it’s retirement and the issues that are out there that most people believe in, whether it’s mortgages or the interest-rate environment.

Just a lot of things that people have heard before might not be true, ideas that they have, things that they focus on. We’re going to try to shine the light on personal finance. It’s pretty easy to tell we don’t like the conventional way of thinking, so everything you’ll hear from us hopefully will be against the grain. So if you’re somebody who likes inside-the-box strategies, it’s probably not for you. If you’re somebody who is looking to learn new ideas, maybe you can implement some, maybe all, maybe none … Regardless, we’ll try to bring things to the table that people haven’t heard elsewhere that the wealthy have been doing that we haven’t been told about and try to input some new ideas, some creative thinking, and hopefully change your life for the better.

H: We really want to work with you guys on understanding the model of how money works and how you can be in control of your money instead of constantly giving control over to someone else. So part of the podcast is also—it’s not getting you to buy something; it’s getting you to be educated and to start to understand is this program the best for me? Because we’ve been taught to believe myths or … thought they were truths.

H: [We will] break those myths down and show that they aren’t actually truths. They are ways that are keeping you from gaining financial freedom and from experiencing what it’s like to control the money that you make. You go to your job that you love, but at the end of the day or the end of the month, there just seems to be no money left. And you don’t understand why you’re working so hard and you’re not getting anything back. That’s the goal: to go outside what we’ve been taught for generations to do with our money, such as compound interest, such as buy term and invest the difference. Why are those myths so wrong? And what is a different way of thinking about money and life and how to leave a legacy, not just for your family, but your family’s family.

N: Yeah, and you and I both have talked to people who have said, “I thought I was following the rules right, or I was doing what the big boys told me to do; I just don’t have any money.” So somewhere in there what the world told us to do and what we’ve actually got was not really happening. Hopefully, we can dispel some things and, as Holly said, give you a little bit more financial freedom just by changing how you’re working with money. It’s so easy for it to slip out into the wrong things. That’s our goal for this podcast. New ideas. Creative things. [Thinking] outside the box.

H: Nate, how often are we going to be recording this show?

N: We’ll be recording this show on a bimonthly basis, so twice a month. And we’re going to plan on sending out a new podcast every second and fourth Thursday of the month. So you can expect a new podcast from us every second and fourth Thursday of the month. And we’ll hopefully be able to give you some new insights. About thirty minutes of your time, so not too long of a podcast, but we’ll try to get down and dirty with the meat of the content and go from there. This has been Dollars and Nonsense. If you follow the herd, you will be slaughtered.

H: Thanks for joining us! 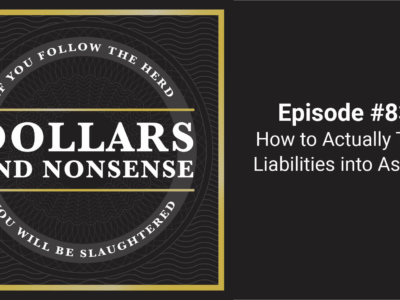 by Dollars and NonsenseDecember 23, 20190 comments

E83: How to Actually Turn Liabilities into Assets 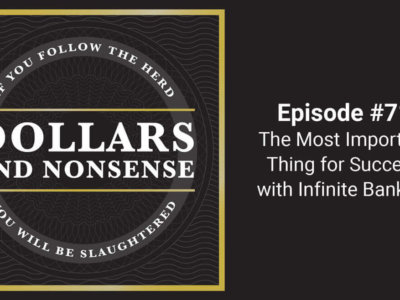 by Dollars and NonsenseJuly 1, 20190 comments

E71: The Most Important Thing for Success with Infinite Banking 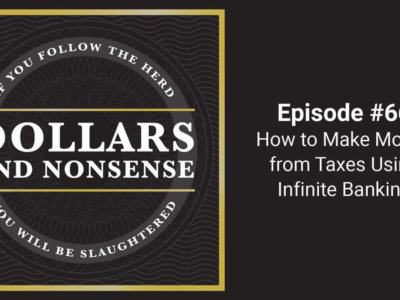 by Dollars and NonsenseApril 15, 20190 comments

E66: Fundamentals of How to Fund a Banking Policy 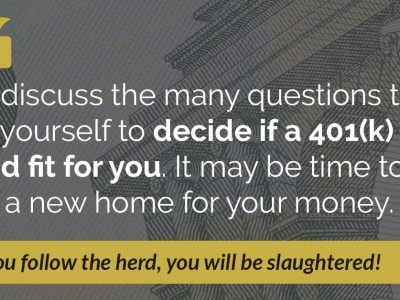 by Dollars and NonsenseJuly 9, 20180 comments