What is the Willie Sutton Rule? 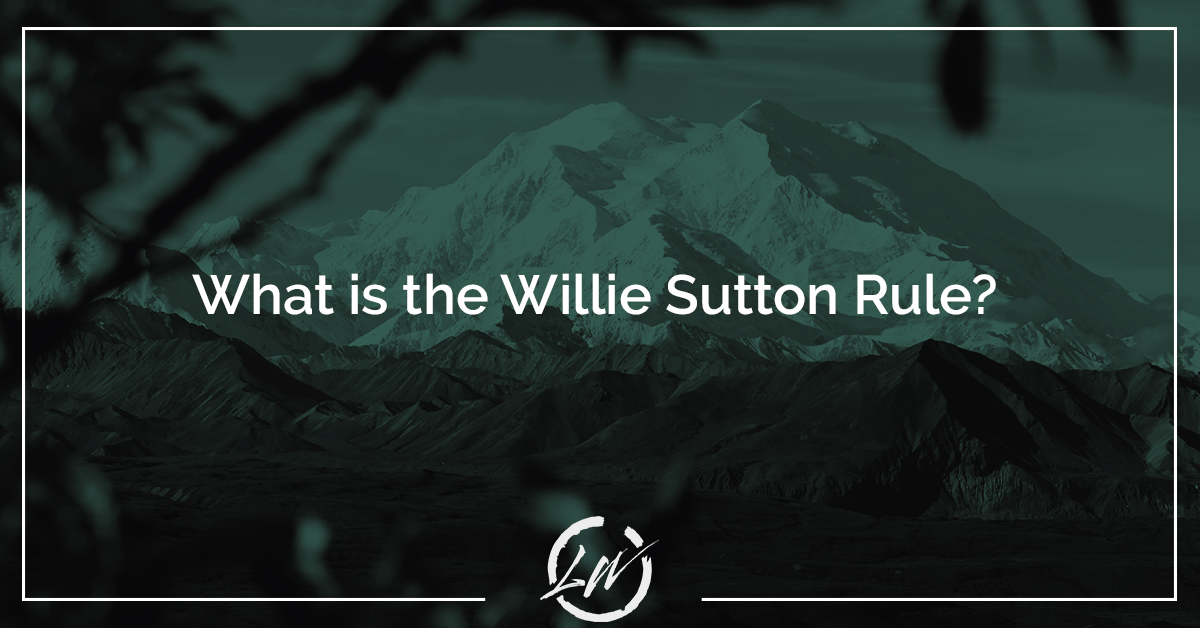 What is the Willie Sutton Rule?

In episode 127 of our Dollars and Nonsense Podcast, show hosts Holly Reed and Nate Scott discussed the Willie Sutton Rule. Here’s more about the concept and how it applies to the investment world.

The Willie Sutton Rule or Sutton’s Law states that you should choose the most apparent option or route when diagnosing, doing, or trying to achieve something. Essentially, it is a reminder to focus on the most efficient and effective way to produce the best results.

The rule is named after American bank robber Willie Sutton, who is known for an infamous crime career that lasted 40 years. During those four decades of robbery, Sutton stole an estimated $2 million, was put on the FBI’s top ten most wanted list, was arrested multiple times, and escaped from prison three times.

Reporter to Sutton: Why do you rob banks?

The Willie Sutton Rule stems from a story of an interview with the robber. In the story, reporter Mitch Ohnstad asked Sutton why he robbed banks. According to Ohnstad, Sutton replied, “Because that’s where the money is.” The authenticity of this story has been questioned over the years. In his autobiography, Sutton even denies that he ever said it. Nonetheless, the quote evolved into the Willie Sutton Rule and has become a common ideology.

The Willie Sutton Rule has been used in many fields, including science, medicine, accounting, finance, and more. In the medical field, for example, it refers more to diagnoses. It is invoked mainly for medical students to emphasize that the most obvious diagnosis is the most probable one. And so, it is best to run tests in the order that attempts to rule out the most likely conditions, diseases or illnesses before moving on. This expedites the diagnosis while minimizing the use of resources and costs.

Sutton’s Law in Finance and Investment

In the finance and investment world, the rule focuses on achieving profits and returns. It states that more time and effort should be put into activities that will produce the highest yield or best rewards. For investors, this could mean investing in stocks that may be less profitable but are more transparent and likely to succeed. These types of positions may not produce the highest yield, but you know what you are getting into. Once you have exhausted the more obvious stock options, you can move on to more lucrative positions. This can help avoid the mistake of first putting everything into a venture that may never develop or succeed.

In episode 127, Nate and Holly discuss the Willie Sutton Rule in relation to wealth accumulation and the government.

“It is just something within human nature to look at where money is being stored and for us to ﬁgure out how we can get our hands on that guy’s money,” said Nate.

He attributes Sutton’s infamous quote to mean that when wealth is accumulated, someone will try to steal it. However, when this is applied to personal wealth, the ones trying to do this are not bank robbers. Instead, it is the IRS and other government and financial institutions; the infinite banking concept can help avoid this.

How to Accumulate Money That Can’t Be Stolen

“It is a great way, one of the best tools we know of, to accumulate money that can’t be stolen,” he added.

When you put your money into something like a 401k, it is uncertain how much money will be yours in the end and how much money will go back to the government. Additionally, you are losing control of the money you have put into the account. In banking, money is not being stolen from the account. Instead, it is being put to work. As a result, the bank reaps the rewards, and the customers get nothing in return.

The ideology also suggests why some aspects of the life insurance industry were created. Mutual life insurance, for example, is there to profit policyholders, and they are the only owners.

Infinite banking uses whole life insurance policies to grow wealth tax-free, and be used tax-free at any time. This helps shield policy owners from taxation and from institutions trying to use your money to their advantage.

“Anywhere people are trying to accumulate money, someone else is going to try to steal it or limit it or control it. And that guy is normally the government,” said Nate. “That’s why we have these MEC rules. Why do we have to design policies in certain ways, we can’t do in other ways, and so forth. It’s all due to Willie Sutton’s law.”

To listen to more episodes of Dollars and Nonsense, click here.

E130: Should I Borrow From Whole Life Insurance Policy or Use CashPrevious Post
E131: New IRS Rules Impacting IBC and How to Best Navigate ThemNext Post

Home » What is the Willie Sutton Rule?