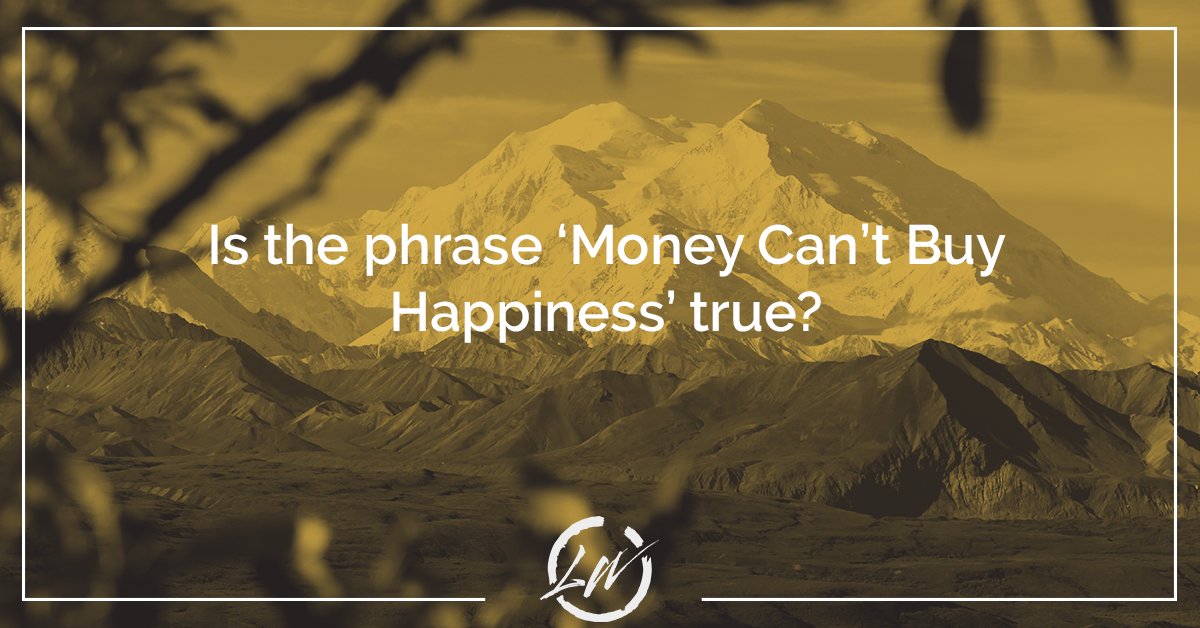 You may have heard the phrase “money can’t buy happiness”. It is a common mantra to remind us that money may not be the answer to all your troubles, but is this always the case? Does money really buy happiness? Research by Northwestern Mutual suggests that money can be a source of happiness, but it is also a source of stress. This article will investigate this concept further to determine if money does, in fact, “buy happiness.”

Before we examine the happiness research by Northwestern let’s look at the origin of the phrase “money can’t buy happiness”.  The expression appears to originate from a similar phrase first coined by a Genevan philosopher, writer, and composer, Jean-Jacques Rousseau. In 1750 he wrote: “Money buys everything, except morality and citizens.”

Now on to the happiness study. The 2018 Planning and Progress Study was commissioned by Northwestern Mutual and conducted by Harris Poll to explore feelings and attitudes towards money, financial decisions, and financial security for Americans in a particular age group.

The study polled 2,003 Americans aged 18-34 using an online survey between March 7 and March 19, 2018. The results of this survey were weighted to Census targets for different demographics. The propensity score was also weighted based on the likelihood of participants being online. The propensity score looks at the probability that the people polled have specific results or be assigned to certain treatments. This can help offset selection bias.

The survey showed that 68 percent of Americans surveyed felt happy about their financial situation or felt happy about it sometimes. However, large portions of the group also felt negative emotions towards money.

Approximately 54 percent felt anxiety towards their financial situation, with 25 percent feeling anxiety “all the time” or “often.” This financial anxiety also caused 28 percent of the group to feel depressed at least monthly and 17 percent to feel the effects weekly, daily, or hourly.

Another 52 percent surveyed felt insecurity (24 percent felt this “all the time” or “often”), and 48 percent felt fear towards their current financial situation.

Money also was shown to be the top source of stress in the group (44 percent), which surpassed other forms of stress such as personal relationships (25 percent) and work (18 percent).

These results were not surprising considering large percentages of the group experienced high or moderate anxiety levels towards financial costs. This is especially true for expenses that are unplanned, unpredictable, and uncontrollable such as the rising cost of healthcare (59 percent), unplanned financial emergencies (55 percent), and unplanned health emergencies (53 percent).

Similar research on this topic has been done throughout the years. A notable study was conducted by Daniel Kahneman and Angus Deaton in 2010. The study looks at the relationship between income, emotional wellbeing, and life evaluation. It surveyed 450,000 Americans and found that emotional wellbeing increased with rising income. However, after the household income surpassed $75,000, happiness did not change as drastically, but life evaluation continued to improve. This data concluded that income over $75,000 does not buy happiness but can buy satisfaction.

In 2021, a study done by Matthew Killingsworth challenged the conclusions of the previous research. The study was conducted through a smartphone app that would periodically ask a large group of people how they felt towards the day on a scale going from “very bad” to “very good.”

He found that happiness and life satisfaction continued to increase with increasing income, even after the household income surpassed $75,000. Nonetheless, the margin between income and happiness above $75,000 was small. And it is essential to remember that correlation does not mean causation.

What does this research suggest?

Essentially, all the studies mentioned draw a similar conclusion: there is a correlation between money and happiness. However, that does not mean that money will solve all your problems.

As the study by Northwestern Mutual shows, the uncertainty of financial expenses (e.g., the rising cost of healthcare) is often a leading source of financial stress when you are not confident with your current financial situation. However, a larger income and good financial planning can help alleviate some of this stress, which could alleviate some of the negative feelings it causes. Therefore, a correlation between a larger income and happiness and life satisfaction would make sense in this scenario. Nonetheless, the relationship between money and happiness is not black and white.

How money positively impacts your life depends on various factors, such as cultural/societal values, where you live, how you value money, and what the money is spent on.

For example, if you are in a lower-income household, having enough money to provide adequate access to healthcare, healthy food, mental health supports, etc., can help improve the quality of life for you and your family. This would likely positively affect your happiness.

However, if there is more than enough to access those services, some may argue that what is done with that surplus of money may not have much of an impact on happiness. This is not always the case.

For example, an article called “If money doesn’t make you happy, then you probably aren’t spending it right” looks at the correlation between happiness and how the money is spent.

The authors found that spending our money on experiences and helping others often brought the most significant levels of happiness. (Other suggestions can be found in their paper here.) Therefore, it may be more beneficial to spend money to go on a trip, rather than buying a new large screen TV. Likewise, you may feel more personal satisfaction donating to a charity important to you than buying a new sports car.

Based on some of the research discussed above and personal views, some may deduce that the answer to this question is “yes.” However, the answer is more nuanced.

A higher income is likely to have a positive impact on many. It helps ensure you get the necessities and are better prepared to handle unforeseen events and challenges. Additionally, a surplus of money may allow you to have more experiences and give back to the community, which can instill happiness. However, these things may not hold as much value to different people and cultures. Therefore, a better answer to the question may be “sometimes” or “it depends.”

E136: Why People Easily Confuse Infinite Banking Concept for a Get Out of Debt HackPrevious Post
E137: Do You Need an Emergency Fund or is there Something Much Better?Next Post